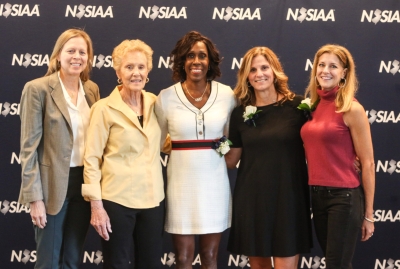 The NJSIAA has spent much of the past year acknowledging the 50th Anniversary of Title IX, the landmark federal legislation which granted unprecedented educational and athletic opportunities for females.

The culminating event in that celebration took place on Sept. 18, when the NJSIAA hosted a very special event at the Westin Princeton at Forrestal Village. It was sponsored by the NFHS Foundation and NJ.com.

Each high school in the state was invited to send a student representative to take part in a brunch program which featured a panel discussion involving five former standout New Jersey female athletes, who’ve all used their sporting experience to become very successful in life.

The many girls in attendance not only learned from the discussion, they were also able to talk with the panelists before and after, and additionally participate in a question-and-answer portion of the program.

The panel was moderated by Dana O’Neil, a Senior Writer for The Athletic, who was a field hockey standout at South Hunterdon. The panelists were Val Ackerman, a three-sport great from Hopewell Valley High School who is now commissioner of the Big East Conference; Bonnie Bernstein, who before becoming a famous TV sports personality and executive was a champion gymnast at Howell; Joetta Clark Diggs, a four-time track Olympian and entrepreneur who starred at Columbia High School, and Cathy Rush, an Oakcrest High graduate who later coached the Immaculata College women’s basketball team into the sport’s first dynasty program in the 1970s.

The day began with remarks from Colleen Maguire, NJSIAA Executive Director who herself was a star athlete at South Hunterdon and is the first woman to lead the state association in its history. Jen Fleury, the athletic director at Villa Walsh Academy, gave a history of Title IX and examples of the opportunities it has brought women athletes over the past 50 years, and Joanne Dzama, the AD at Morristown-Beard, introduced the panel.

After that, O’Neil led an active discussion with the panelists where they opened up about their experiences, challenges that they’ve faced and ways in which they’ve achieved success. They also presented pointers for the attendees on how to embrace the opportunities in their own lives to become successful as they grow.

The tone for the two-hour program was set by Bernstein with one simple remark early in the discussion, when she noted a simple fact to the attendees: “We were you.”

“This was really awesome,” said Bridget Davis, senior swimmer from Union Catholic who is headed to the University of Connecticut. “I was very impressed by the panelists and I feel very inspired. I’m going to take this with me throughout my career because they said such special things. As women, they were so motivating and told us things that were so important to our future.”

One of the points stressed by the panelists to the students was the importance of using different opportunities they will be given to network themselves. Everyone on the panel had specific stories to tell in which they did exactly that.

Examples of networking even took place within the room. Davis and a couple of the other students will be attending Big East schools. They were each able to individually speak and introduce themselves to Ackerman, the commissioner of the conference. Other contacts with the panelists were made as well.

“I actually talked to Val,” Davis said. “I went up and introduced myself. She’s such an inspiration for women in sports. Being such a big voice for us, it’s important to hear and listen to her, and it was great to meet her.”

“This was really inspiring,” said Madison O’Brien, a senior field hockey athlete from South Plainfield. “I was pretty nervous coming here because it was going to be with a bunch of of people that I didn’t know. But I made a lot of friends with people with similar interests and it was really nice. I loved to hear from women who’ve gone through a lot, and to see them and hear them motivate us was special. Seeing that they were also all from New Jersey and went on to do big things was also very inspiring.”

The panel spoke about how opportunities for women in sports have evolved during their careers. When Rush attended Oakcrest in the early 1960s, the school actually dropped girls sports after her freshman year. While Ackerman (Virginia) and Clark Diggs (Tennessee) both received college scholarships in the days before the NCAA became involved in the governance of women’s sports in 1982, things like room and board and textbooks weren’t necessarily covered. Each had a story which modern-day athletes might not realize.

Issues were also explored. Bernstein noted that while participation in sports helps open doors later in life, numbers show that girls have been exiting at a higher and earlier rate than boys. The panel spoke to the girls about ways how that can change in the current climate, especially since an overwhelming majority of women in c-suite positions (a term to identity high-ranking executive titles within an organization, usually containing the word “chief”) grew up playing some level of organized sports.

Ackerman also noted how opportunities within sports for women are expanding into leadership roles. Her own career took her from playing basketball to law school to a job as an attorney at the NBA, to then becoming the first president of the WNBA. When Ackerman began at the NBA in the 1980s, she noted there really weren’t other women in similar roles to look up to. If there were women leaders in sports, they were most likely coaches. Things are much better now, and Title IX has been a major part of that growth. She also stressed the importance of networking and being active in order to capitalize on that growth.

The panel also discussed challenges and adversity which will inevitably happen, and the importance of persevering through them. Rush spoke of her battle with breast cancer. Clark Diggs spoke of the competition becoming tougher as she moved along in her career. O’Neil told of being a victim of layoffs at ESPN, which led to her being hired at The Athletic, where she has since flourished. Ackerman opened up about her father, who was the athletic director at Hopewell Valley and her role model, and how he died suddenly at age 54 just a month into her breakthrough job at the NBA. Bernstein, who now runs her own production company, told of being pigeonholed by sports media people who saw her as an on-camera talent and not someone who could create behind the scenes.

It was also stressed that mental health is a very real issue, and as athletes and leaders, the girls have a obligation to be solid citizens, not just in their personal behavior, but in also helping out and looking after others, both as a teammates and human beings.

Another resonating story was told by Bernstein about her days as a gymnast at Howell. She was leading the all-around competition at the Shore Conference championship meet by such a margin that she calculated how she could fall twice on the balance beam and still win. It was one of her best events, and she had never fallen more than once. That day, she fell three three times and lost out on the championship. She later realized what happened: she had placed her focus on standing atop the podium, rather than on the task at hand. It’s something she’s never forgotten, and the lesson has motivated her to this day.

The Q and A session included questions to the panel asking things like what has empowered them, and what keeps them from being scared.

Another point which came up several times was the importance in today’s world of establishing a personal brand. But, as O’Neil reminded the attendees, that brand must also be authentic.

“I didn’t know what to expect,” said Brooke Snider, a field hockey player from Millburn who has committed to Ithaca. She came into the event not knowing  anything about the panelists, and was thrilled to learn their stories, and to even find out that she’s growing up the next town away from where someone like Clark Diggs, a four-time Olympian, made her mark at the same age.

“I really enjoyed being around so many female athletes who are also such inspiring people,”  Snider said. “It really resonated when Bonnie said that she and all of the women were us at one point. I was in the room picturing myself speaking on stage being one of them. It was very empowering.”

To Snider and so many other attendees, it was also instructional. She was one of many students who stuck around to take pictures with the panelists and receive one-to-one advice.

“I feel like I find myself getting frantic a lot and just very nervous about the future and not being as grounded as I could be,” she said. “But speaking to all of them and their reminding me to be where my feet are will be very helpful going forward. I learned a lot in all sorts of ways.”

Comments like those made the panelists glad to have been part of the event.

“This was a great day,” Rush said. “It was an amazing group of people. I think it teaches the value of sports, not necessarily winning in sports, but competing, and learning, and picking yourself up after adversity. And after listening to some of the young women here, they were super. I would like to track them and see where they go.”

For Maguire, who herself used lessons from her days as a 2,000 point basketball scorer in high school to help in her rise to become leader of the NJSIAA, the event was all that she hoped for and more. She was even in a bit of awe herself, since she would attend Rush’s basketball camp as a youngster.

“It’s hard for the kids to have a lot of historical perspective in general,” she said. “For them to actually hear the panel’s stories was a really big deal. And then there were athletes like a softball player going to Georgetown who got to meet the commissioner of the Big East, so that’s cool for them. The panel did such a great job, they were a group of such heart-felt people.”

While the focus of the day was to salute Title IX, there was a secondary element to celebrate during the event - the extraordinary talent produced in New Jersey.

“We’re a teeny-tiny state sandwiched in between New York and Pennsylvania,” Bernstein said. “I remember doing an interview with a New Jersey magazine several years ago and I was asked what about you embodies New Jersey. There’s something to be said about how we’re kind of like the middle child. We’re constantly scratching and scraping and clamoring for attention, because there’s New York and there is Pennsylvania. Hearing the reading of the bios about how extraordinarily accomplished these women were as athletes and are now as professionals, it really was an honor to be on the stage. It’s nice for us to recognize women from this state and to show these girls what’s possible.”