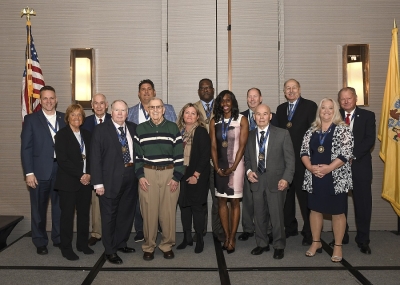 A stellar group of 18 high school athletes, coaches, and contributors were inducted on March 27, 2022 into the NJSIAA Hall of Fame. All 2022 inductees recognized during a celebratory event at the Westin Princeton at Forrestal Village in Princeton were selected by a statewide committee of journalists and both active and retired school administrators.

“This 2022 class is yet another reminder that there never seems to be a shortage of remarkable individuals to honor,” says Colleen Maguire, NJSIAA executive director. “Scholastic athletics in New Jersey has a long, and tremendously proud history, and nothing testifies to that more than the exceptional groups of inductees we have year, after year, after year.”

The 2022 Hall of Fame class were initially announced during 2021, but restrictions related to the pandemic delayed the formal induction ceremony. Yesterday’s event also included a number of service awards, two Award of Honor presentations, and the NFCA Northeast Sectional Volleyball Coach of the Year.

A list of all those honored during the induction ceremony follows. Further details, including biographical information, are available at HOF Program 2022.indd (njsiaa.org)